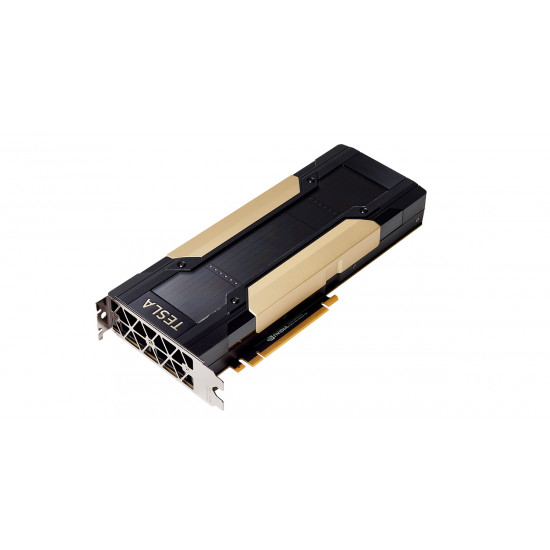 The Era of AI

Finding the insights hidden in oceans of data can transform entire industries, from personalized cancer therapy to helping virtual personal assistants converse naturally and predicting the next big hurricane.

NVIDIA® V100 Tensor Core is the most advanced data center GPU ever built to accelerate AI, high performance computing (HPC), and graphics. It’s powered by NVIDIA Volta architecture, comes in 16 and 32GB configurations, and offers the performance of up to 100 CPUs in a single GPU. Data scientists, researchers, and engineers can now spend less time optimizing memory usage and more time designing the next AI breakthrough.

From recognizing speech to training virtual personal assistants and teaching autonomous cars to drive, data scientists are taking on increasingly complex challenges with AI. Solving these kinds of problems requires training deep learning models that are exponentially growing in complexity, in a practical amount of time.

With 640 Tensor Cores, V100 is the world’s first GPU to break the 100 teraflops (TFLOPS) barrier of deep learning performance. The next generation of NVIDIA NVLink™ connects multiple V100 GPUs at up to 300 GB/s to create the world’s most powerful computing servers. AI models that would consume weeks of computing resources on previous systems can now be trained in a few days. With this dramatic reduction in training time, a whole new world of problems will now be solvable with AI.

To connect us with the most relevant information, services, and products, hyperscale companies have started to tap into AI. However, keeping up with user demand is a daunting challenge. For example, the world’s largest hyperscale company recently estimated that they would need to double their data center capacity if every user spent just three minutes a day using their speech recognition service.

V100 is engineered to provide maximum performance in existing hyperscale server racks. With AI at its core, V100 GPU delivers 47X higher inference performance than a CPU server. This giant leap in throughput and efficiency will make the scale-out of AI services practical.

V100 is engineered for the convergence of AI and HPC. It offers a platform for HPC systems to excel at both computational science for scientific simulation and data science for finding insights in data. By pairing NVIDIA CUDA® cores and Tensor Cores within a unified architecture, a single server with V100 GPUs can replace hundreds of commodity CPU-only servers for both traditional HPC and AI workloads. Every researcher and engineer can now afford an AI supercomputer to tackle their most challenging work.